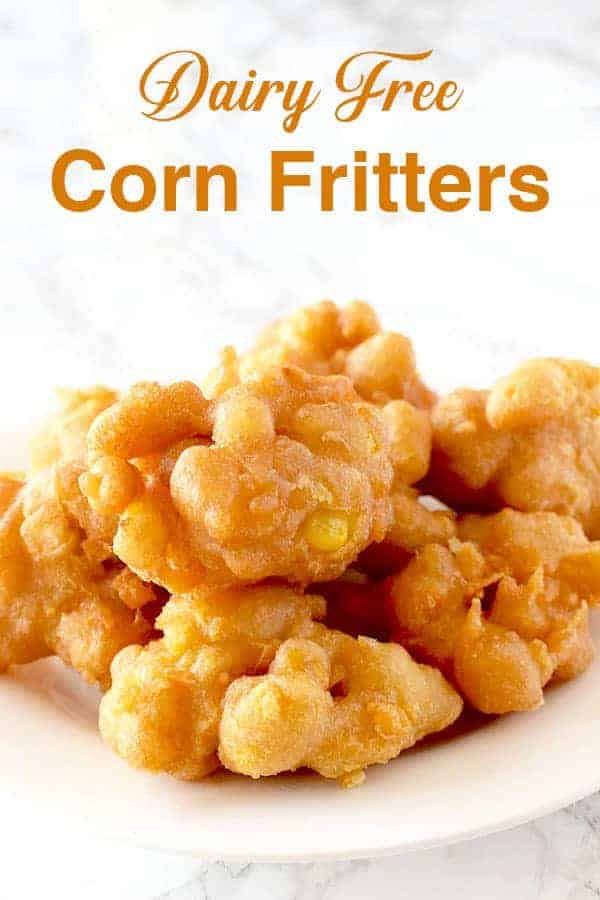 Corn fritters are a great way to repurpose leftover corn on the cob or just have as a quick snack using canned or frozen corn kernels.  Don’t forget to top with powdered sugar, maple syrup, or honey.

American Indians had been using ground corn as food long before European explorers arrived in the New World.

However, American Indians did not deep-fry their food because it required plenty of cooking oil as well as equipment suitable for it.

However, American Indians shared their knowledge of corn and recipes with European settlers.

It was long before the European settlers used this information to create their own cornmeal-based variations of European breads like cornbread.

This eventually lead to the creation of the corn fritter.

Corn fritters probably originated in the South where deep-fried food is a large part of culinary traditions.

However, it spread across the rest of the United States becoming a national favorite.

Today there seems to be a lot of debate about what a corn fitter is.

There are nice puffy deep-fried ones like apple fritters and there flat shallow fried pan fried corn fritters that are reminiscent of Johnnycakes.

It seems to me that the puffy ones here are actually southern style corn fritters since every big Southern food magazine and blog shares recipes for this type of corn fritter.

On the other hand, I’ve also seen Northern food blogs and magazines claiming these as their own and the pan-fried ones as Southern.

Then somewhere else I read that this style is typical of the Pennsylvania Dutch.

After sifting through all the conflicting information I’ve decided that both styles are popular everywhere.

If I had to choose though, I’d say all evidence points to these being Southern style corn fritters.

What type of corn to use?

You can use canned corn or corn kernels cut away from leftover corn on the cob. Either one is fine.

How To Eat it

Corn fritters are considered a sweet snack and can be eaten plain or top with powdered sugar, maple syrup, or honey.

All are popular choices depending on preference and where you are from.

HOW TO MEASURE FLOUR AND OTHER DRY INGREDIENTS

Using a dry measuring cup, scoop ingredients from the bag or spoon them into the cup.

Next, level off the ingredient by removing the excess with an upside-down butter knife.

The one exception to this is brown sugar.  Brown sugar should be packed down, and then any excess should be scraped off as well.

Ever wonder why measuring spoons often come with a set of measuring cups?  I used to.  I didn’t see why we needed a set when we could have one large measuring cup.

After a quick search, I had my answer.  I discovered that the large measuring cup is used for liquids, whereas the set is used for dry ingredients.

As it turns out, if you try to measure dry ingredients with a liquid cup, the measurements get messed up.

First, you pour the flour or cocoa in, next you shake it around to get it level, and then you add more.

By shaking it, you are causing the powder to settle, and when you add more, you end up using more than called for.

WHY SIFT FLOUR and Other Powder Ingredients

There are a number of benefits to sifting flour and other ingredients like cocoa:

It removes any unwanted debris and you can get a more accurate measurement than when packed tightly in a bag.

It also removes any lumps that can get into the batter and be hard to break up later, or be missed altogether before baking.

If you sift the powdered ingredients together, it helps combine them and mix more evenly with other dry ingredients like sugar.

DO EGGS NEED TO BE AT ROOM TEMPERATURE?

The short answer is “no”.  While a side-by-side comparison shows that baking with eggs at room temperature makes a better crumb, it’s not otherwise noticeable.

What are Eggs used for?

Eggs do three things in most recipes: they help bind the ingredients together, act as a mild leavening agent, and they add moisture.

The reason applesauce makes a good binder is that it’s high in pectin. Pectin is a naturally occurring starch in fruits and berries that acts as a thickening agent and stabilizer in food.

This happens when combined with sugar and acid (if the fruit or berry isn’t naturally acidic).

Just keep in mind that it may change the flavor slightly.

No, eggs are not dairy.  Dairy is milk and any food products made from milk, including cheese, cream, butter, and yogurt.

So, while eggs are an animal product, they are not dairy. In fact, eggs fall under the protein food group.

Sugar may seem very basic if you’ve baked before, but I’ve been asked about it in the past – so I’ll explain.

White sugar (sometimes called granulated sugar, table sugar, or white granulated sugar) is made of either beet sugar or cane sugar, which has undergone a refining process.

It is the easiest to find and most commonly used.

Brown sugar is white sugar with molasses added to it.

It is commonly used in chocolate chip cookie recipes, and it’s rare for a recipe that calls for brown sugar not to also call for white sugar as well.

In my recipes, you can use whatever type of brown sugar you have on hand, whether it is dark brown sugar, light brown sugar, or demerara sugar – which is very common in Israel.

Just keep in mind that the flavor and color will be slightly different depending on what you choose to use.

Turbinado sugar is better known as “raw sugar”. But, despite this name, the sugar is not really “raw.”

Instead, it’s partially refined sugar that retains some of the original molasses.

The term “raw sugar” may also give off the impression that it is somehow healthier.

In reality, turbinado sugar is nutritionally similar to white sugar.

Demerara sugar is very popular in Israel and is especially delicious in tea, but is also used for baking.

However, it is still not much healthier than white sugar.

Vanilla sugar is not very common in the States. However, it is common in Israel and parts of Europe.

This is sugar that sat for an extended period of time with vanilla beans, giving it a vanilla flavor.

This type of sugar is common in the United Kingdom.

It has a grain finer than white (granulated) sugar and larger than powdered sugar.

Caster sugar is often called for in recipes for delicate baked goods like meringues, souffles, and sponge cakes.

You can use a 1:1 conversion rate between caster sugar and white (granulated) sugar.

Powdered sugar, sometimes known as confectioners’ sugar, is a sugar with a powdered texture.

This sugar is rarely, if ever, used for baking. Instead, it is used for dusting desserts and making frosting and icings.

In some countries, you can also find powdered vanilla sugar.

It is made the exact same way regular vanilla sugar is made. However, the sugar used is powdered instead of granulated.

In my recipes, I don’t specify what kind of vanilla to use.

The reason for this is that in the States, vanilla extract is exclusively used.

Meanwhile in Israel, along with many European countries, vanilla sugar is common.

In most, if not all recipes, both vanilla extract and vanilla sugar can be used.

In recipes where vanilla sugar can be used instead of extract, you can replace them 1:1.

If you’d prefer to use honey instead of sugar, you can do so with pretty good results.

Honey can be two or even three times as sweet depending on the honey, so for every 1 cup of sugar, you can use 1/2 to 2/3 cup honey.

Since honey adds liquid, you need to remove some to balance it out.  For every cup of honey remove a 1/4 cup of liquid.

Also, it burns faster than granulated sugar, so you want to lower the baking temperature by 25 F or 4 C.  In addition, check it early and often to avoid burning or overbaking.

I’ve had a number of comments asking me questions about baking soda and baking powder.

I’ve also noticed that if the wrong one is used, things don’t come out as they should.

Baking soda is a leavening agent, which means it helps things rise.

It does this by creating carbon dioxide when it reacts to an acid, such as cream of tartar, lemon juice, yogurt, buttermilk, cocoa, and vinegar.

When the carbon dioxide is released, it causes the familiar texture and crumb in pancakes, cakes, quick breads, soda bread, and other baked and fried foods.

Baking soda works well with sourdough because sourdough is acidic.  When combined, it makes a lighter product with a less acidic taste, since baking soda is alkaline.

A good rule of thumb is to use around 1/4 teaspoon of baking soda per 1 cup of flour.

Baking powder is also a leavening agent and it’s a mixture of baking soda, cream of tartar, and sometimes cornstarch.

Most baking powder sold is double-acting. This means that the leavening occurs in two steps.

The first time it’s activated is when baking powder gets wet, which is why you cannot prepare some batters ahead of time to bake later.

The second time is when the baking powder is exposed to heat.  This happens when the batter is being baked or fried.

Since baking powder already contains an acid, it’s most often used when a recipe does not call for an additional acidic ingredient or too little of one.

A good rule of thumb is to use around 1 teaspoon of baking powder per 1 cup of flour.

WHY SOME RECIPES CALL FOR BOTH

Some recipes call for both baking powder and baking soda when the carbon dioxide created from the acid and baking soda is not enough to leaven the volume of batter in the recipe.

Too much baking soda gives a terrible metallic taste, so baking powder is added to give it more lift.

WHICH ONE IS STRONGER?

You may have already guessed the answer since baking soda is used to make baking powder, and you need more baking powder per cup of flour. But I’ll tell you anyway.

HOW LONG DO THEY LAST?

Baking soda is good indefinitely past its best by date, although it can lose potency over time.

However, to be honest, I’ve used very old baking soda with good results.

Like baking soda, baking powder is good indefinitely past its best by date, and can lose its potency over time.

For both opened and unopened, it’s ideal to use it within nine months to a year.

While storing it, make sure to keep it in a dry place and away from humidity.

HOW TO TEST IF IT’S STILL GOOD

If the baking powder is good to use, it should fizz a little.

The mixture should rapidly bubble if the soda is fresh.

Yes. Canned or frozen are the easiest to use.

I made these for dinner tonight and they were fantastic. The kids gobbled them up. I will be making them again.