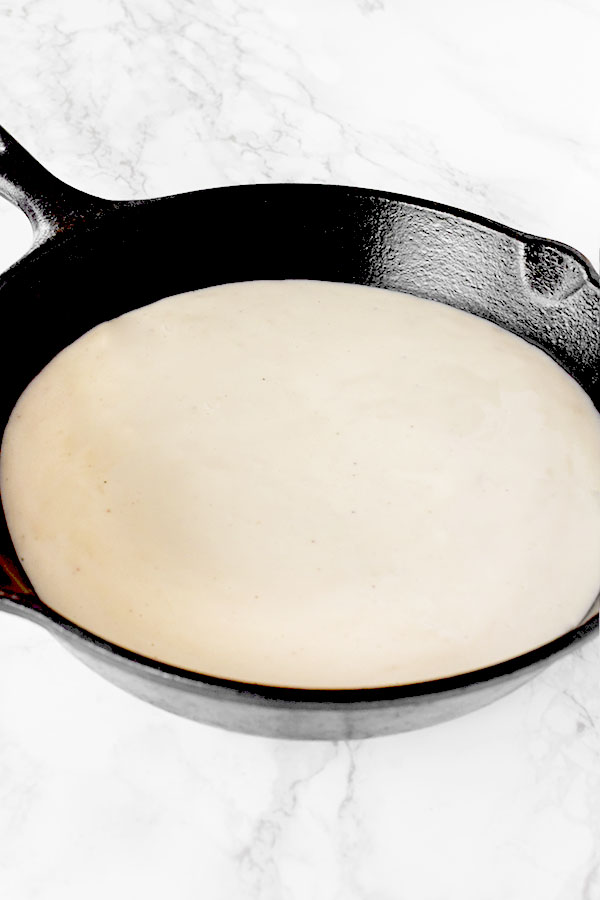 This dairy free country gravy, or white gravy, is made without milk or butter.

Country gravy, also known as white gravy and cream gravy, is popular in the South.

It is also used to make Maryland fried chicken.

Not to mention, when poured over biscuits, it makes delicious over for a vegetarian biscuits and gravy.

You can also pour it over mashed potatoes, which I’ll admit that the first time I tired it, I was surprised by how good it was.

If you want to turn it into sausage gravy for biscuits and gravy you can just fry bits of sausage and mix it in.

This dairy free country gravy is made without milk but can be made with just about any dairy free milk you want.

Sometimes I will use mostly water and use the oat milk primarily for the color it gives the gravy which water can’t.

Does Country gravy aka white gravy have dairy in it?

Yes, country gravy / white gravy contains dairy because butter is typically used to make the roux and milk is used as well. In fact, some people call this a milk gravy because milk is a major ingredient.

Does country gravy aka white gravy have meat in it?

No, country gravy / white gravy does not contain meat. If it has meat added it is called sausage gravy.

What is country gravy aka white gravy made of?

How to make white gravy aka country gravy?

Country gravy / white gravy is made by using butter and flour to make a roux. Next, milk is added to create a gravy. Lastly, salt and pepper are added to season it.

Can you make country gravy aka white gravy without milk?

Country gravy / white gravy needs liquid to turn it from a roux into a sauce. Milk is generally used to do this but you can use a dairy free milk or even water instead.

Water can also be used as a substitution for milk when making country gravy / white gravy.

Personally, I like using a combination of water and whatever dairy free milk I have in the fridge.

How do you make country gravy aka white gravy without butter?

The butter actually isn’t necessary to make country gravy / white gravy though it is what is typically used.

What you really need is a fat to make the roux.

This fat can be oil, animal fat/drippings, or butter.

How do you thicken gravy without butter?

Butter does not thicken gravy on its own. Instead, it is used with flour to make a roux.

So, if you want to thicken a gravy without butter, use oil instead of butter when making a roux.

What kind of dairy free milk to use

While many recipes can hide mask flavors of dairy free milk, like how you can’t taste the coconut milk in my dairy free pumpkin pie, this recipe has too simple a flavor profile for that.

Dairy free milks may add their own flavor to country gravy / white gravy. So, unless you want that flavor in your sauce, you want to use a mild flavored diary free milk

Water has no flavor and almond cooking milk is specifically created to be used in dishes like this so they both work well here.

I also really like a neutral flavored oat milk for this recipe and mild flavored almond milk works nicely too.

However, what gives them their colors also makes a big difference in their flavor profiles.

White gravy is made with milk or water so it keeps the natural color of the flour.

Brown gravy is made from beef stock and is often served over mashed potatoes or dishes like loco moco.

Traditional gravy regular table gravy can be a brown gravy, but is usually made with whatever drippings and stock of whatever it’s being served with.

So, brown gravy should be served with beef rather than thicken or turkey. However, there aren’t any strict rules about these things.

The second is that country gravy does not not include meat in it where sausage gravy as sausage in it.

The difference between country gravy and pepper gravy is the amount of pepper.

How do you make this dairy free country gravy into a dairy free pepper gravy?

To turn this dairy free country gravy into a dairy free pepper gravy increase the pepper to 1 to 2 tablespoons.

WHAT IS A ROUX

A roux is equal parts flour and fat cooked together until it reaches a specific color.

It is used as a thickening agent for gravy, sauces, soups and stews and have been used in French cooking for hundreds of years to thicken sauce.

The flour is added to the melted fat or oil on the stove top, blended until smooth, and cooked to the desired color.

A roux can be white is used for white sauce, blond for classic gravies, or brown is used in gumbo and jambalaya.

The lighter the roux the more thickening power it has.

Once the roux is the desired color liquids like stock are added.

People often see instructions like “brown the flour” and avoid this step because they aren’t making brown gravy.

Browning flour means you’re cooking the flour. This removes the flour flavor so it won’t ruin the taste of your gravy.

WHY USE FLOUR TO THICKEN GRAVY

I use flour to thicken gravy because it gives the gravy that classic opaque slightly pail look.

Many people don’t like using flour because if it isn’t cooked long enough, it can give a floury flavor to the gravy. Also, if not made properly it can become clumpy.

The Good news is, making a smooth creamy gravy is a snap if you turn it into a roux first.

Another benefit some people see with gravy made with flour is that it keeps better in the fridge. This means it can be made ahead of time or use up leftovers.

What Kind of Oil to Use

Flavored oils like olive oil and coconut oil can be used as well but may add an undesired flavor to your dish.

Schmaltz or other rendered animal fats can also be used in place of oil and may add a nice savory flavor.

For gluten free, you can replace flour with (gluten free) cornstarch, potato starch, or most any other starch.

Instead of making a roux, use a slurry.

WHAT IS A SLURRY

Slurries are commonly used in Asian cooking and Chinese-American cuisine. It is used to make sauces needed for recipes like Beef Broccoli and Pepper Steak.

A slurry, like a roux, is used to thicken gravies, sauces, stews, and soups. However, unlike a roux it is added at the end of the recipe.

It is a combination between corn starch or potato starch and water and provides a silky texture.

While it is less common, slurries can be made out of flour.

Can it be made ahead of time?

Yes. You can make this gravy a day or two before and simply reheat it shortly before you’re ready to serve.

Let sauce cool completely, cover it with wax paper or pour a film of milk over it to prevent a skin from forming.

Once the gravy has cooled, place it in an air tight container. Keep up to 5 days in the refrigerator.

Once the gravy has cooled, place it in an air tight container or a resealable freezer bag.

You can freeze gravy for up to 5 months. After that, it is still safe to eat but the quality begins to degrade.

Gravy will thicken as it cools. When you reheat it out with additional dairy free milk or water until it is smooth and reaches your desired consistency again.

*for a dairy fee pepper gravy use 1 - 2 tablespoons of pepper.

If the gravy becomes too thick, you can thin it out with a little more water or dairy free milk.

This was amazing! I can't have dairy right now, since I am breastfeeding a baby with a cow's milk protein intolerance. I was so sad that I couldn't have so many of our family meals. Well, now I can have fried chicken with rice and gravey! I just used some of the oil from frying the chicken as my fat and it came out perfect! I had tried making gravey with milk alternative once, before I found this recipe, but it did not turn out well. I used Oatly and followed the recipe and my husband says he likes it just as much as the original, if not better! Thank you so much!

You're very welcome! I am so glad to hear this :)

This was an excellent recipe. I have had to limit the amount of potassium in my diet and was wondering how I was going to be able to make some of my favorite foods. This recipe worked incredibly well. I halved the recipe and it still made gobs of gravy. I will probably quarter it next time. I like a lot of black pepper in my white gravy and adding that was just perfect.