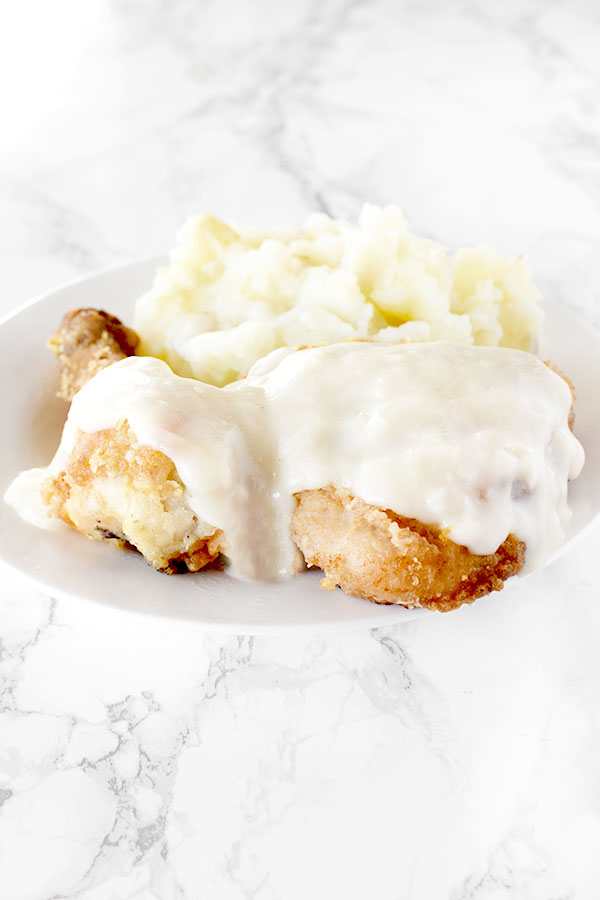 Maryland Fried Chicken is juicy and tender, due to being fried and steamed, and is smothered in white gravy and served with mashed potatoes.

Maryland fried chicken is a beloved dish of the state.

They say every family Maryland has their own heirloom and it’s a regional specialty in Eastern Shore restaurants.

Like Southern Fried Chicken, this chicken is fried in a cast iron skillet.

However, unlike unlike Southern fried chicken, it has a thin crust and is both fried and steamed.

This is done by adding water to the oil after the chicken has browned and covering it tightly with a lid.

I was given this recipe by a reader who says “this is not a crusty coated chicken.  The special thing about it is how soft and tender the meat is.”

She also added that “there is a good reason why this is served with a thick gravy as it sort of replaces the crunchy coating of Kentucky Fried Chicken.  Sometimes I think the gravy is the most important part.”

I cannot help but agree with her. I loved the addition of the gravy. It really made the dish for me.

The one change I did make to the recipe is that I wet the chicken before putting it in the flour.

When I didn’t, the flour just fell right off when it hit the oil.

However, it’s also worth noting that I think my chicken air dried a little while I was doing other things, so this is probably not a necessary step if you’re using chicken right from the package.

I’d like to give a huge thank you to Sheina for this recipe!

When frying chicken, the temperature of the oil is important. If it’s too cold, the chicken will be oily.

On the other hand, if the oil is too hot, the crust will fall off.

If you don’t have a thermometer, when the oil seems hot, drop a little flour into the oil.

If the flour sizzles and floats on the top, it’s hot enough.

To make sure it’s not too hot, keep it around medium-low and adjust as needed.

For a gluten-free alternative, use corn starch or potato starch instead of flour. They both fry very nicely.

Yes and no.  It is not necessarily healthier as far as bacteria is concerned, since bacteria can only safely be killed with heat.

Also, the salting process used to remove blood from the animal is also believed to provide better quality meat.

Kosher poultry and meat are salted to remove blood which is forbidden to be consumed according to Jewish law.  This is said to create a sort of quick dry brine.

While I’ve only eaten kosher meat so I cannot compare, I’ve been told by non-Jews who do not keep kosher that they’ve noticed that kosher chicken is of superior quality to cook with.

No.  According to the USDA washing meat or poultry in water spreads bacteria throughout the kitchen.

Water can splash bacteria up to 3 feet surrounding your sink, including onto countertops, other food, towels, and you (i.e. cross contamination).

Do not use warm or hot water.  It is unhealthy to do so. It can start cooking your chicken, and doesn’t evenly.

If you have extra raw chicken that you didn’t use but want to refreeze, you can as long as it was thawed in the fridge.

According to the USDA, “food thawed in the refrigerator is safe to refreeze without cooking.”  However, you do lose quality when refreezing previously defrosted meat.

How do you make the white gravy?

Click on the link to white gravy that is in the ingredient list. This will bring you to a white gravy recipe.