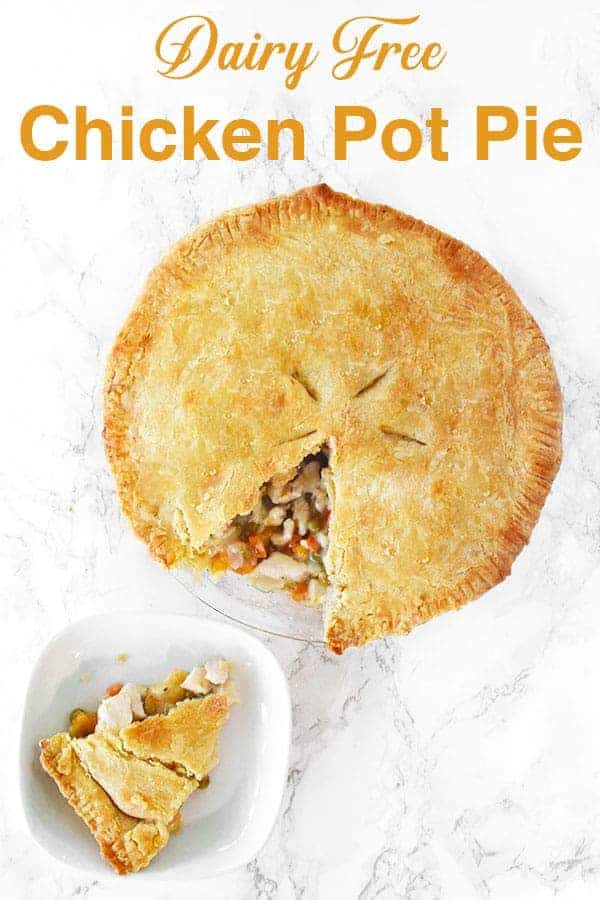 This dairy free chicken pot pie is very simple to make and uses ingredients you have on hand. You can also easily swap out ingredients you don’t like for ones you prefer.

I used to love chicken pot pie as a kid and I considered the frozen individual pies my dad would get my brothers and I a big treat.

It’s not uncommon for flavor preferences to change as you get older.  Adults have less taste buds than children do making it harder for them to pick up on subtle flavors.

I decided to add garlic for additional flavor. Other optional additions to the pie are potatoes and celery. Some, although pretty uncommon, and thyme.

Also, if you don’t like anything, feel free to leave it out. My Mom doesn’t like cooked carrots so when she makes chicken pot pie we often trade carrots out for potatoes.

Another optional addition is dry white wine if you want to add a gourmet note to this dish.

It’s not traditional by any means, but sometimes I like to add a touch of sophistication when I’m serving it exclusively to adults.

I’ve put this in the notes at the bottom of the recipe.

Pot pie is believed to have originated in ancient Greece.  The Greeks cooked meats mixed with other ingredients in open pastry shells called Artocreas.

Later, the Romans supposedly took this recipe and added a top to the pastry crust, making it a fully enclosed meat pie like we serve today. These pies pastries were served at banque.

Then during the Renaissance, the English gentry revived not only classical art but the ancient meat pie. Meat pies became very popular and pies made with pork, lamb, venison, and poultry were common.

In fact, they were so common that a nursery rhyme incorporates it.

Sing a song of sixpence,
A pocket full of rye.
Four and twenty blackbirds,
Baked in a pie.
When the pie was opened
The birds began to sing;
Wasn’t that a dainty dish,
To set before the king.

Notice how the pie was set before the king.  This isn’t just being playful.  Pot pies were considered a delicacy.

Pot pies were served at the wedding of Marie de’ Medici and Henry IV of France.

However, the pies served were actually a form of amusement because when their guests sat to eat songbirds flew out just like in the rhyme.

For at least a couple hundreds of years this was a popular form of entremet adopted from the ancient Romans. Cookbooks even had recipes on how to do this.

There is one pot pie named “Sea Pie” because it was made aboard ships where they used whatever meat they had available. It typically included pigeons, turkey, veal, and mutton.

Pot pie eventually made its way to America with settlers who brought recipes their recipes with them and it spread as they moved west.

Why I use Fresh Chicken Breast

I don’t think using left over chicken makes for a very good pie. This is especially true if you opt to use chicken breast which is notorious for how quickly it becomes dry.

In fact, I’ve been wanting to try adding raw instead of freshly cooked chicken breast to the pie to see if it makes for even juicier pieces.

This is a good option. Almond cooking milk has a thicker milk like texture, unlike regularly almond milk, and is still low in calories

I really like coconut milk because it is so creamy. However, depending on the coconut milk you use, you may end up with a light coconut flavor.

Oat milk can also be a good option. It is the most environmentally and ethically friendly of all the milks and unlike most dairy free milks, it has a creamy texture like actual milk.

If you want to make this pot pie a little more gourmet you can add one cup of dry white wine when making the sauce and 1/2 teaspoon dried thyme when simmering.

if using a deep dish pan double the liquid for the sauce. 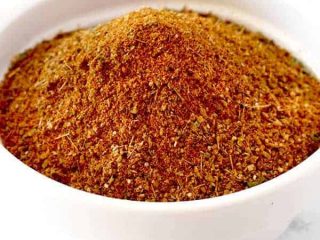 This was so good! I used oat milk and it turned out perfect!

It came out perfect! Thank you for the beautiful recipe, Elissabeth!

You're welcome! I'm happy to hear you enjoyed it so much :)

This was great. Going to add a bit more salt and pepper and no thyme next..time. But we loved this! Used oat milk for the first time and opened a whole new world of cooking for us. Thank you for sharing this recipe.

You're welcome! I'm very happy to hear that you liked the recipe so much :) I'm also glad that I was able to introduce you to oat milk, it is definitely one of my favorite milk alterative.

Thank you for the recipe. The pie turned out great.

It doesn’t say when to out it the frozen peas. So, I mixed them in last. Right before i poured the mixture i to the pie crust.

That's perfectly fine :) but it actually does state it in step 2.