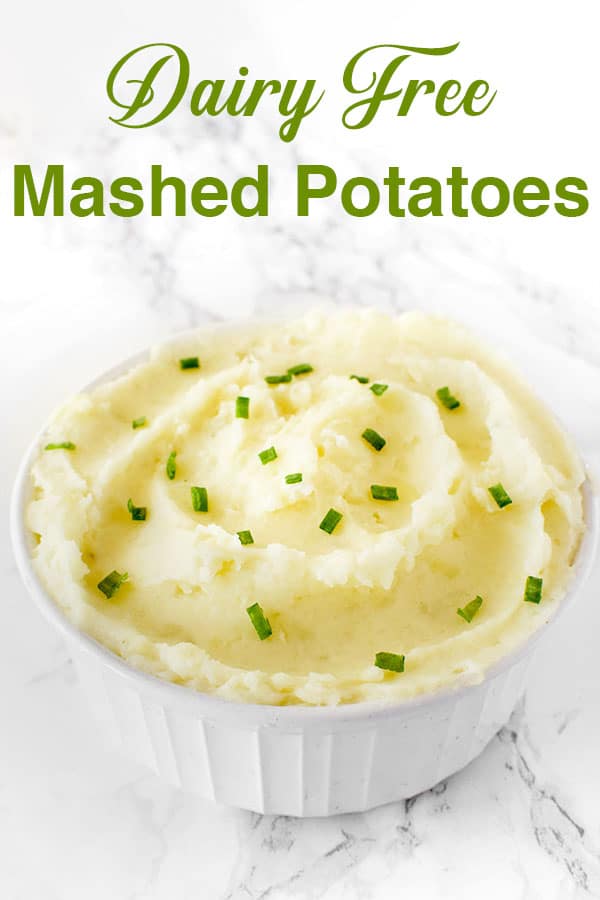 These dairy free mashed potatoes are made without milk, without butter, without cream, and without cheese. However, they are still creamy and can be made ahead of time thanks to a secrete ingredient.

Mashed potatoes are a classic American side dish.

This is because potatoes originated in the New World.

Rice on the other hand, has a long history in Asia, the Middle East, and even Africa.

While rice was imported into Europe since ancient times, brought from Asia by returning soldiers from Alexander the Great’s military and later imported from Egypt.

Potatoes however, while commonly associated with Ireland, were brought to Europe by the Spanish the second half of the 1500’s.

Potatoes became an international staple because they were cheap to grow and high in nutrition.

They are a rich source of vitamin B6 and vitamin C providing almost 25% of your daily value of each.

Potatoes are very versatile and mashed potatoes are arguably the most common way they are prepared and eaten.

The first recipe for mashed potatoes first appeared in The Art of Cookery by Hannah Glasse in 1747.

Boil your Potatoes, peel them, and put them into a Sauce-pan, math them well: To two Pounds of Potatoes put a Pint of Milk, a little Salt, stir them well together, take care they don’t stick to the Bottom, then take a quarter of a Pound of Butter, stir in and serve it up.

While the Art of Cookery originated in England, it was very popular in the Thirteen Colonies as well in America after the War of Independence.

In fact, Benjamin Franklin, Thomas Jefferson and George Washington all with owned copies of it.

Can you make mashed potatoes without milk?

Absolutely! What you really need isn’t milk but a liquid.

This liquid can be a dairy free milk, starchy water from boiling the potatoes, chicken stock, or vegetable stock.

What can substitute for Milk in Mashed Potatoes?

Milk is not necessary in mashed potatoes. All you need is a little liquid to make it not too dry.

There are many options.

Dairy free milk can be a nice substitute, especially if you like the flavor they add.

Can I use water instead of Milk in Mashed potatoes?

Absolutely. I even recommend using the starchy water you boil the potatoes in.

If you don’t want to, fresh water can be used as well.

How to Make Something Creamy without Dairy?

What you use really depends on what you are making. With dairy free mashed potatoes, any of these options work.

How to make mashed potatoes without milk?

Mashed potatoes can be made easily without milk or butter.

What you need is a liquid – which ever you prefer – so the potatoes aren’t dry.

Then, you need a fat to help make them creamy. Butter is usually used but fats like olive oil, animal fats, and even mayonnaise can be used.

My personal favorite is mayonnaise which is a surprisingly versatile ingredient.

Do You Peal Potatoes Before Boiling for Mashed Potatoes?

You can but you don’t have to. Potatoes that have clean skin can be washed and left on.

I like leaving the skins on but I choose which way to do it based on the preferences of whoever else will be eating it.

There are generally three types of potatoes: waxy, starchy, and those in between.

Waxy potatoes, such as Red Bliss and fingerlings, have a smooth skin and creamy, almost shiny flesh.

Because waxy potatoes are relatively low in starch and high in moisture, they stay intact when they’re cooked.

These potatoes have a nice potato flavor and hold up when boiled or baked even if sliced or cubed.

The most common example of starchy potato are russets aka Idaho potatoes.

As you may have guessed by their name, they’re higher in starch and lower in moisture than waxy potatoes. They have matte-skinned and fall apart when boiled.

Starchy potatoes are ideal for adding creaminess to puréed soups or providing the airy, whipped texture to a mash. They are also good for roasting and frying.

These fall somewhere between the waxy and floury making them the “all-purpose” potatoes.  The most commonly known of them are Yukon Golds.

Because they hold their shape when boiled, grated, or fried and yield to mashing, they’re very versatile.

Since the waxy are most flavorful but the starchy are airiest, for the ideal mashed potatoes use half and half.  This is a tip I picked up from the New York Times.

However, if you could only choose one, choose the in between option like Yukon Gold.

Or if where you live you don’t have any clear way to know what type of potato you have available, use whatever you have.

Believe it or not, it’s best to begin cooking potatoes in cold water. It doesn’t have to be chilled, just the cold side from the tap.

Also, if it’s better that way, why waste the gas and cooking time by boiling the water?

My secret ingredient to perfectly creamy mashed potatoes is… mayonnaise!

Mayonnaise is actually great in cakes, quick breads, and when used for grilling, frying, and roasting.

I use a little bit of it in here because I like letting the potatoes speak for themselves.  However, you can use up to half a cup if you want a more pronounced flavor.

So why mayonnaise?  Because it makes your mashed potatoes creamy, and as a bonus, it doesn’t harden up in the refrigerator, so you can make them ahead of time.

Even if you don’t like mayonnaise don’t worry, you don’t taste it at all when it’s just two tablespoons for 2 pounds of potatoes.

Make Ahead of time

Simply make the day before (or even a few days before) and reheat when ready to serve.

Place in an airtight container or leave in a bowl and wrap in plastic wrap and refrigerate.

Cover potatoes with water in 2-quart saucepan. Bring to a boil over high heat.

Reduce heat to low and simmer 10 minutes or until potatoes are tender. Drain. If desired reserve 3 tablespoons of water to use instead of stock.

Mash the potatoes with the stock or reserved water and garlic if desired.

Add the mayonnaise. Mash until creamy.

If desired, you can use a dairy free milk instead of the reserved water.

I like my mashed potatoes to taste mostly like potatoes to let the main dish really shine, however, you can add up to 1/2 cup (8 tablespoons) of mayonnaise if desired.

I loved using the mayonnaise! Tried it last night and I am a convert. I will tell you that instead of water, I always use vegetable broth to boil my potatoes. It takes a little (2 minutes maybe) longer to boil, but the flavor is out of this world!

It is amazing how big a difference the mayonnaise makes isn't it!