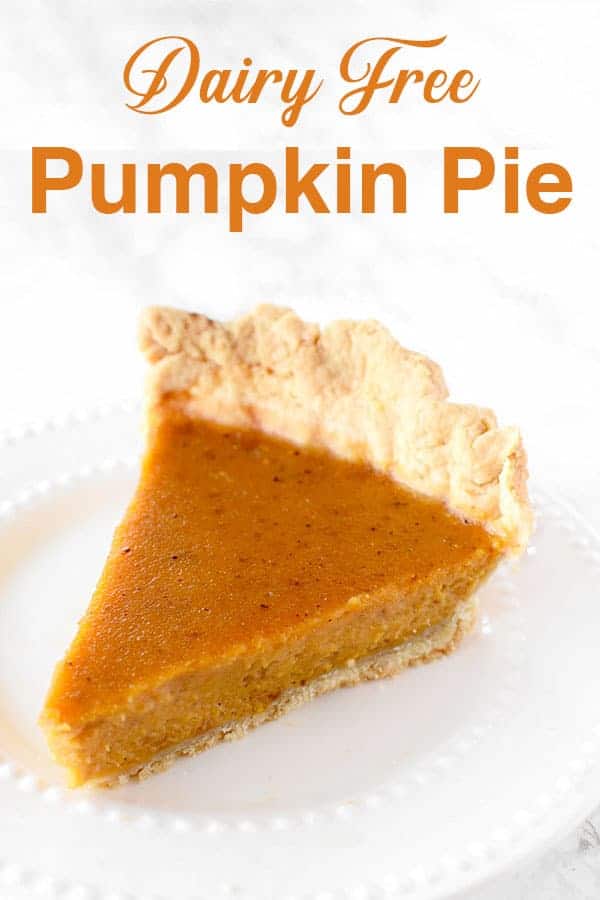 This kosher dairy free pumpkin pie is made with coconut milk making it a perfect dessert for a dairy free Thanksgiving and year-round. This one bowl recipe couldn’t be easier and is more likely to come out picture perfect than most.

Pumpkin pie is without a doubt my favorite pie.  In fact, when my brother once asked me what my favorite food was, this pumpkin pie was the only thing that came to mind.

I, like most, associate it with all things autumn and Thanksgiving.

I would wait all year for pumpkin season just to enjoy it as our Thanksgiving dessert.

However, recently I realized that I don’t need to wait for Thanksgiving to make it.  In fact, millions eat it year-round.

This revelation came to me when my Mom reminded me that my great-grandmother used to serve it to us almost every week during our Sunday visits.

There I’d sit on the kitchen floor playing with vintage toys or listening to her folk songs she learned while growing up on the farm in Michigan.

Then, we’d have a lunch of tuna casserole followed by pumpkin pie for dessert.

Maybe all of this nostalgia is why I love pumpkin pie so much. So, I’ve given myself permission to have pumpkin pie year-round and twice on Thanksgiving.

Thanksgiving has always been my favorite holiday because it was one of the two times of year the whole family would get together at my great aunt and uncle’s house.

Four generations would gather, my great-grandmother being the oldest, and my brother’s and I being the youngest.

I still chase and try to recreate that blissful feeling every year.

The thing is, no bought pumpkin pie, or even most homemade pumpkin pie ever compared to my mothers. They were simply too bland.

So, this recipe is taken from my mother (but this pumpkin pie is with coconut milk and extra sugar instead of using a dairy free whipping cream).

The pumpkin is native to North America and was served at the first Thanksgiving.

It was an early export from the New World to Europe and pumpkin pie recipes could be found in seventeenth century English cookbooks.

Pumpkin pies made by early American colonists were very different than what we know today as pumpkin pie.

Their “pies” actually savory soups made and served in a pumpkin rather than a sweet custard in a crust.

It was not until the early 1800s that the recipes appeared American cookbooks and that pumpkin pie became a common addition to the Thanksgiving dinner.

At the same time in England pumpkin “pies” were prepared by stuffing the pumpkin with apples, spices, and sugar and then baking it whole.

Why Do We Eat Pumpkin Pie on Thanksgiving?

This is actually due to the same incredible woman who is behind our celebrating Thanksgiving altogether: Sarah Josepha Hale.

Hale was prominent writer and editor.

She wrote the children’s poem Mary Had a Little Lamb, helped found the American Ladies Magazine, which she used a platform to promote women’s issues, and was the editor for Godey’s Lady Book for more than 40 years, turning it into one of the most influential periodicals in the country.

While at Godey’s, Hale often wrote editorials and articles about the holiday including Thanksgiving, despite it not being a holiday yet.

She believed that if Thanksgiving was passed as a federal holiday, it would help ease growing tensions and divisions between the North and South at the time.

Hale advocated for the national holiday for 17 years before it was successful. She wrote presidents Taylor, Fillmore, Pierce, and Buchanan who all ignored her.

However, this didn’t stop her. She published recipes for the holiday in her magazine so women would know what to make for it. Among these recipes was pumpkin pie!

It was finally President Lincoln who listened, though he planned on declaring the holiday in April.

Hale wrote again, and within a week, Thanksgiving declared to be on the final Thursday in November.

He hope, as Hale did, that it would help “heal the wounds of the nation.”

Thanksgiving was declared a national holiday by President Abraham Lincoln half way through the civil war.

However, since pumpkins were native to the North, southern states had no tradition of eating pumpkin pie, they saw it as a symbol of Yankee culture imposed on them.

So, they made sweet potato pie instead. This tradition still holds in the South today just as pumpkin pie does in the North.

The hardest part of making a pumpkin pie is the custard filling.

A custard is defined as a “milk or cream cooked with egg yolk to thicken it” and it can be a little tricky to make.

If you’ve ever tried to make pumpkin pie before you may have gotten cracks on top or served it fallen and maybe even a little wet.

The first step is making sure the custard isn’t too thin so the liquid won’t gather on top. To do this I add a little bit of corn or potato starch.

Next, we make sure to bake it at a low temperature.

The pie usually falls because it rises too high when baking, due to the higher temperature, then as it cools, it falls.

By baking it on a lower temperature it stays more even and won’t fall.

Lastly, cracks on top are due to over-baking or baking too close to the heat source.

To avoid this, bake on the middle rack and turn off the heat as soon as the pie has set in the middle.

Another problem a pumpkin pie can have is that it’s prone to having is a soggy crust.

One technique used to have a perfect crust is blind baking it.

Do this by first covering the crust with baking paper or tin foil and filling it with pie weights, sugar, beans, or pennies and bake at 375°F or 190°C 30 minutes.

Then remove the filling and bake for another 10 minutes to brown the bottom.

While the crust is still hot, you can brush it lightly with egg whites.  Let them set and do not add the filling until the crust has cooled completely.

Doing this creates a barrier for the filling.

My favorite dairy free substitute for evaporated milk is coconut milk due to its cream like consistency. Other milks alternatives are too thin.

In recipes with lots of flavor like this dairy free pumpkin pie, you can’t even taste the coconut.

As mentioned above, a custard requires milk or cream.

Usually pumpkin pie calls for evaporated milk. Clearly, this is not possible when making a dairy free pumpkin pie.

If you do not want to use coconut milk you can use a dairy free whipping cream.

My Mom made her pumpkin pie dairy free this way long before I heard of coconut milk. However, since dairy free whipping cream is sweetened, cut the sugar by half a cup.

This recipe calls for unsweetened milk because evaporated milk is unsweetened as opposed to sweetened condensed milk.

However, it also calls for more sugar than most recipes (1 and ½ cup rather than ¾ cup) because I think the pie tastes much better a little sweeter.

If you use sweetened coconut milk you should probably also cut the sugar by half a cup.

Nope. There isn’t even a hint of coconut flavor in this pie.

If you’re not thrilled by the idea of using filling that comes out of a tin can, or live abroad and don’t have access to pumpkin pie filling, butternut squash is a great substitute.

As it turns out the Dickinson pumpkin used in making Libby’s pie filling is actually the most in taste and texture to butternut squash.

I can actually confirm this to be true.

After moving to Israel, my Mom insisted on growing her own Dickinson pumpkins for pumpkin pie.

Anyway, we made pumpkin pie with the Dickinson pumpkins and it was exactly like my butternut squash pie.

No surprise, they were both just like Libby’s pumpkin pie filling.

Making Ahead of Time

The filling can be made a day in advanced. In fact, doing so allows the flavor of the spices to develop.

Freshly baked pumpkin pie, will keep for about 3 to 4 days if covered and refrigerated.

Can Pumpkin Pie Be Stored at room temperature?

No. It has a custard filling, so it needs to be refrigerated.

Let cool to room temperature. Cover loosely with plastic wrap or foil. Refrigerate for up to 3 to 4 days.

Let cool Let cool to room temperature. Wrap in plastic wrap until tightly sealed. Then wrap in a layer of aluminum foil.

If you do not have plastic wrap and aluminum foil, place it in a resealable freezer bag.

Place on a level freezer shelf and freeze for up to 1 to 2 months. After this, the pie is still safe to eat but the quality begins to degrade.

When you are ready to defrost the pie, transfer it to the refrigerator. Let thaw for at least 12 hours.

*If you'd rather not used canned pumpkin, you can use homemade butternut squash puree and it will taste exactly the same and even have a little prettier of a color.

Calorie count does not include the crust

I made this because my granddaughter is lactose intolerant. I also used Laksnto sugar substitute as I don't eat regular sugar. I gave samples to everyone. The verdict.......pure perfection!! Thank you.

You're very welcome! I'm so glad to hear that! Thanks for sharing :)