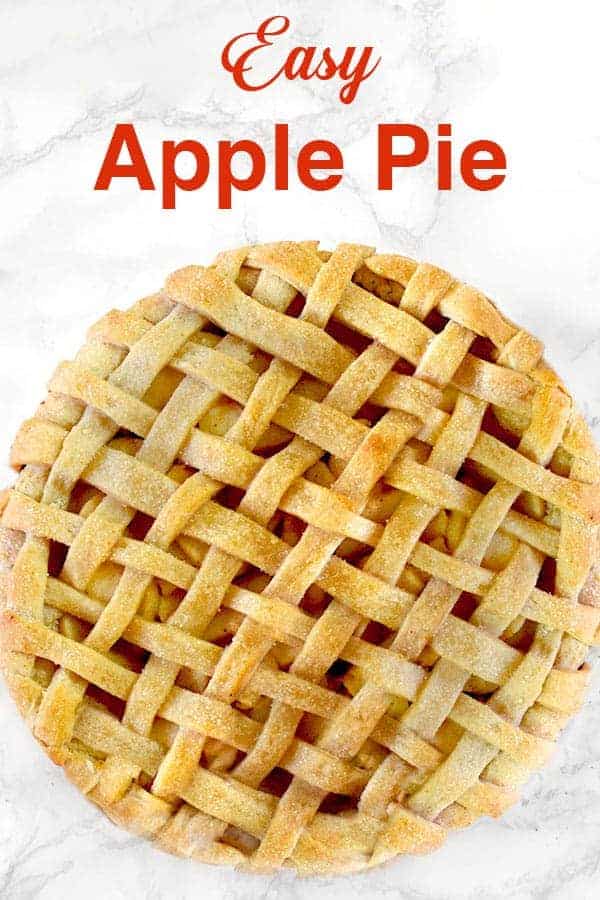 Whether you’re making dairy free apple pie for the 4th of July, Thanksgiving, or just because, this dairy free dessert couldn’t be easier. Serve with a scoop of ice cream on the side.

While the earliest known apple pie recipe is from England dating back to 1381, it wasn’t what we’d think of as apple pie today.  It included not only apples and spices but also figs, raisins and pears.

The Doutch style was in some ways more similar to the American apple pie we know today.  It often only used apples in its pie, it did call for cream, a laundry list of spices, and was often topped with a crumb topping.

However, apple pie has been a cornerstone of American culture since English and Dutch settlers came to the New World.

Since the only native apple is the crab apple Eurpoeans had to wait for the varieties they brought with them to grow into trees and bear fruit.  However, these trees quickly led to the development of hundreds of new native varieties.

The truth is, even after the settlers had apples they mainly used it for cider.  It only started to really gain popularity around the time colonists declared their independence.

While apple pie was particularly common in 18th-century Delaware and American apple pie recipes, both manuscript and printed, from throughout the young country.

Then, in the 1920s, the phrase as American as apple pie started to appear in print. By World War II, soldiers declared that they were fighting “for mom and apple pie.”

What type of apples are used

Usually tart apples like Granny Smith apples are used because they hold their shape better than sweet apples.  Other apples include Braeburn, Gala, Cortland, Bramley, Empire, Northern Spy, and McIntosh.

How thin to slice apples

Apples should be cut as thin as a quarter to half inch slices.  I really like using a peeler and corer machine for this because it gets the slices just right and saves loads of time.

Why pre-cook the apples

By pre-cooking the apples before baking them they actually stay firmer.  I know it sounds counterintuitive but trust me it works. This is because an enzyme naturally present in the apples will convert the pectin in the cell walls into a heat-stable form.

You do this on the stovetop but you risk over-heating them and turning them into apple sauce.  Or in the microwave, but its a bit of a hassle. Sous-vide is a great option but it takes an hour.

So, I recommend using the hot water method which is pretty much you pouring boiling hot water over the apples and letting them sit covered for 10 minutes.

Lemon juice helps prevent the apples from browning.  If you don’t have it, it’s not the end of the world. I don’t always use it but apples here in Israel also don’t seem to brown as quickly either.

Adjusting for a Convection Oven

An ordinary oven cooks by enveloping food in hot, dry air. This air heats the outside of the food which slowly penetrates to the inside of the food until it’s cooked all the way.

Now, in a convection oven, the fan produces extra energy. It takes the hot air and blows it around, producing around 25 to 30 percent more energy, depending on the fan’s power.

Regular ovens also can have hot spots, but the fan in a convection oven will circulate the air to help even out the temperature variances.

Since convection ovens produce more heat, you need either lowering the temperature or shortening the cooking time to compensate.

When recipes specify temperatures and cooking times, it’s for conventional ovens. Of course, this is unless the recipe is specifically for convection ovens.

The simplest method is to set the oven 25ºF to 50ºF lower than the recipe says.

A simple rule to follow is to lower the temperature by 25ºF when baking cookies and pies, but 50ºF when roasting meats. Some convection ovens offer separate settings for baking and for roasting.

You can also leave the temperature the same and instead shorten the cooking time by 25 percent. For example, if your recipe calls for 60 minutes in the oven, check the food after 45 minutes instead.

However, keep in mind, some convection ovens actually make a heat adjustment for you. That is, if you set a convection oven for 350ºF, it might actually set itself to 325ºF to compensate. So, check your manual before making adjustments.

Over time the thermostat on ovens gets a little off causing some ovens to run hot and others to run cool.  This is why recipes tend to say things like “10 to 15 minutes or until golden brown.”

So, if it takes you longer than expected that’s fine, don’t worry about it, just keep baking until ready.

Make ahead of time

A freshly baked pie can stay fresh on the counter for up to two days and in the fridge for up to five days.  Covering it loosely with plastic wrap will help it stay fresh as long as possible.

Wait until the pie as fully cooled – about two hours.  Loosely covered with foil or plastic wrap and store in the fridge for up to five days.

Pie was delicious but accumulated a lot of liquid. Why is that?

Are you sure you put in the flour?

This and the pumpkin pie are insanely delicious. Thank you!!

You're welcome! I'm so glad to hear you feel that way :)

I make this apple pie all the time . I don’t add nutmeg bc kids don’t like it . I do add a little vanilla extract. Thanks for the recipe . I get so many compliments on the pie .

I'm happy to hear it! Thanks for sharing :)

I make this apple pie every week for Shabbat. My family is obsessed with it ! I don’t add nutmeg since kids don’t like the taste of it . Thank you so much for sharing the recipe .

You're welcome! I'm so glad to hear you and your family love the recipe :)

This was a delicious apple pie! I also made the dairy free crust recipe you have shared using extra virgin olive oil, and it turned out well. I didn't search up the proper technique to 'lattice' so the pie didn't look very pretty, but the taste was so good, and to me that's what matters.

I also didn't use the egg glaze on top, and therefore made the pie vegan. It's definitely the best vegan apple pie I've ever had! Thank you very much for sharing. I will definitely make this pie again.

You're very welcome :) I'm glad you enjoyed it so much!