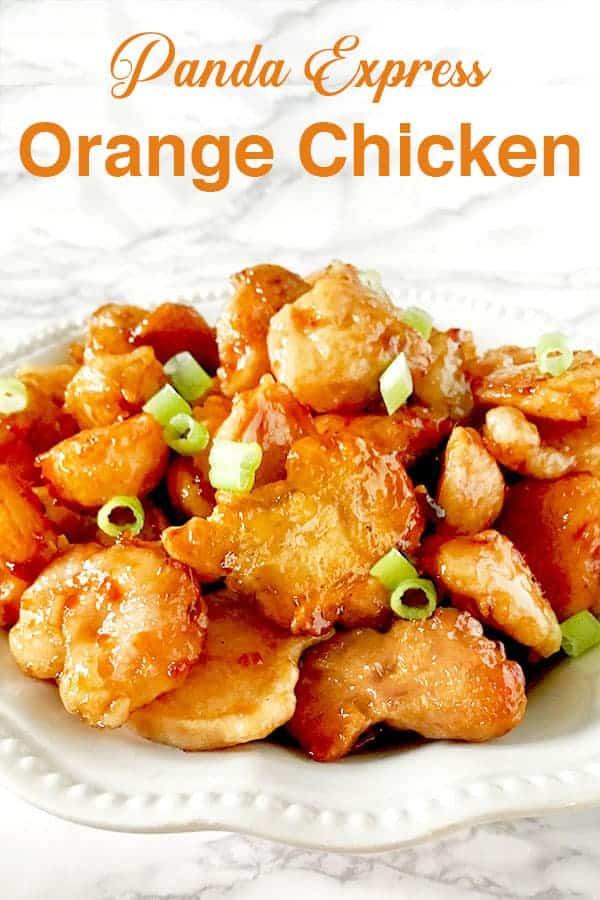 This orange chicken is a Panda Express copycat with crispy chicken in a sweet and tangy orange sauce.  Serve with white rice and steamed broccoli.

I feel a little funny calling this recipe “chinese orange chicken” because it is a really Chinese-American dish.

Traditional Chinese orange chicken is made with sliced fresh chicken not the battered and fried like in American “Chinese” restaurants.  Also, it is flavored flavored with dried orange or tangerine peel.

This version of orange chicken is claimed to have been developed in a Panda Express in 1987.

Supposedly, Chef Andy Kao was working on developing a new recipe when customers came in, smelled the dish, and ordered it right away.

WHY IS SESAME OIL OPTIONAL?

Sesame oil is relatively expensive and adds more calories to an already fattening dish.  Most recipes require it and if you have it on hand you are welcome to use it.

Personally though, I don’t think it makes enough of a difference to the flavor to require it and when making this dish I usually leaving it out.

Most people have a preference between eating white meat or dark meat.  They both certainly have their benefits and detriments in this recipe.

Use one hand to dip the chicken in the egg and the other to roll it in flour.

By using both hands you avoid getting thick layers of batter on your fingers known as “club hand.”

Place half the flour at the bottom of a container. Add the chicken and cover with the remaining flour.

Cover with a lid and shake for a few minutes. Each piece should come out well coated.

When frying chicken the temperature of the oil is important.

If it’s too cold the chicken will be oily. On the other hand, if the oil is too hot the crust will fall off.

If you don’t have a thermometer, when the oil seems hot drop a little flour into the oil.

If the flour sizzles and floats on the top it’s hot enough.

For a shallow fried version follow the frying steps I use in my Chinese lemon chicken but use this sauce instead.

Water can splash bacteria up to 3 feet surrounding your sink, including onto counter tops, other food, towels, and you (i.e. cross contamination).

If you have extra raw chicken that you didn’t use but want to refreeze, you can as long as it was thawed in the fridge.

A dry brine loosens up muscle fibers, allowing them to retain more moisture without adding any excess liquid.

The first time I made this recipe the batter came out much too thick.  I thought of cutting down the flour by half a cup.  Instead, I decided to add a tablespoon of water at a time until I reached the right consistency.