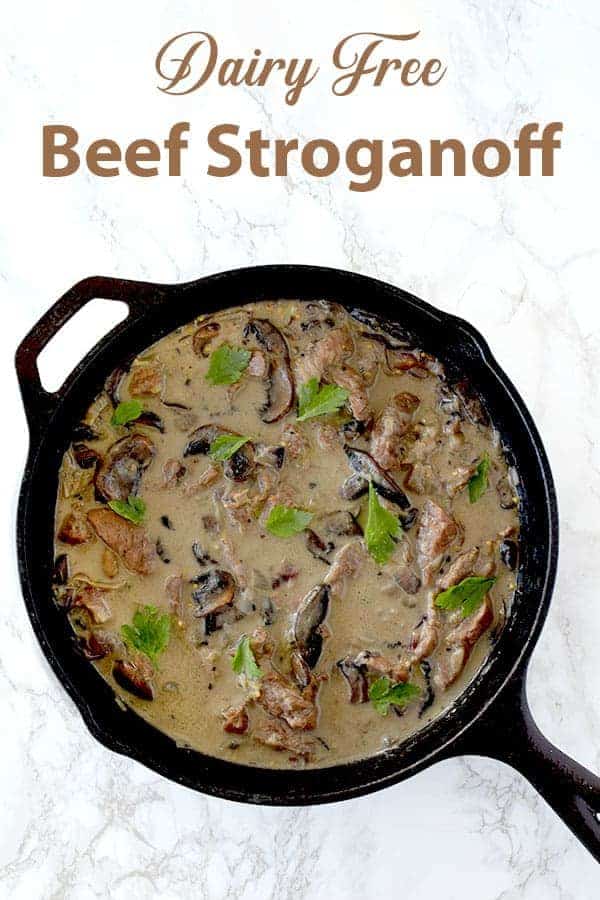 Dairy free beef stroganoff is just as rich and creamy as the classic due thanks to coconut cream. Aside from the coconut cream this recipe is completely authentic.

Serve over mashed potatoes with a dill pickle on the side as Russians do or over pasta.

Beef stroganoff was in part what inspired The Taste of Kosher.

I’d heard of the dish but never tasted it before and decided to look it up.  I quickly realized that it had sour cream making it not kosher due to the restriction of cooking meat and milk together.

Then I noticed that Winchester sauce (being English) was a popular ingredient and a large clue in authentic recipes.

Now, not every recipe has to be authentic, tasty is tasty, but it being cultural cuisine was a big draw for me.

So, I was frustrated by not being able to find authentic cultural recipes made kosher. While complaining to my Mother about this she suggested I make my own site and post such recipe.

I loved the idea and had one of my friends translate a number recipes beef stroganoff so I could make it.  I never like to follow just one recipe, so I usually work from a few and combine them.

Still, it took me quite a while before I got around to making it.

While looking at the recipes I was surprised to learn that Russian beef stroganoff was different in many ways from I had seen in photos.

It was often red due to the addition of tomato paste, it never had an option for ground beef, and it was served over mashed potatoes and with a dill pickle on the side.

How to eat beef stoganoff

Internationally, beef stoganoff is served over a plate of thick flat egg noodles. However, that is not actually the proper way to eat it.

In Russia it is served over potatoes or rice if you’re in a pinch. It is also always served with a pickle on the side like all Russian meat dishes.

I discovered that the addition of the pickle is because in Russia, hot meat dishes are served with a pickle on the side. This solved the mystery of why a Russian friend was so often offering my pickles when we had dinner.

Following the meal, if you want to serve dessert, Russian Rogaliki with tea are just the thing!

To make this authentic Russian recipe dairy free I decided to use coconut cream instead of sour cream.  At first I was a little worried that it would taste like coconut or not taste right by not having any tang.

As it turns out though, Russian sour cream is not very sour. So, the loss of sourness wasn’t much of an issue.

Do not use purple onions instead of yellow onions.  I did that once and the dish turned gray and we renamed it zombi stroganoff.

I tried your recipe but had no tomatoe paste so had to omit the water I would have put with my stock cube and traded it for a can of tomatoes diced. It worked out just fine! :) My brand of coconut cream was a bit to pronounced, but it just gave the feel of a split Asian and Russian dish. Kids loved it and my son who doesn't like mushrooms ate almost every last one until I told him. Hahaha!

I'm so glad to hear it! Thanks for sharing that with me :)

I added a squirt of lemon juice to get a little closer to sour cream, and it seems to have toned the coconut down entirely from the last time I tried this recipe. This lactose intolerant gentile thanks you for a great, simple dish.

I'm happy to hear that :) Thanks for sharing your tip

You may enjoy the distinctive coconut flavor. I wonder whether coconut milk would serve a complimentary as opposed to a dominating flavor. Either way it misses the tang Worcester sauce brings to stroganoff. The time and effort were well spent. I’m glad we tried it.

Thank you for your thoughts. You must have used a particularly strong flavored coconut milk (though the recipe calls for coconut cream) because normally the coconut flavor isn't detectable at all. Also, as stated in the body of this text, aside from replacing sour cream with coconut cream, the recipe is an authentic Russian recipe so it would not include Worcestershire sauce.