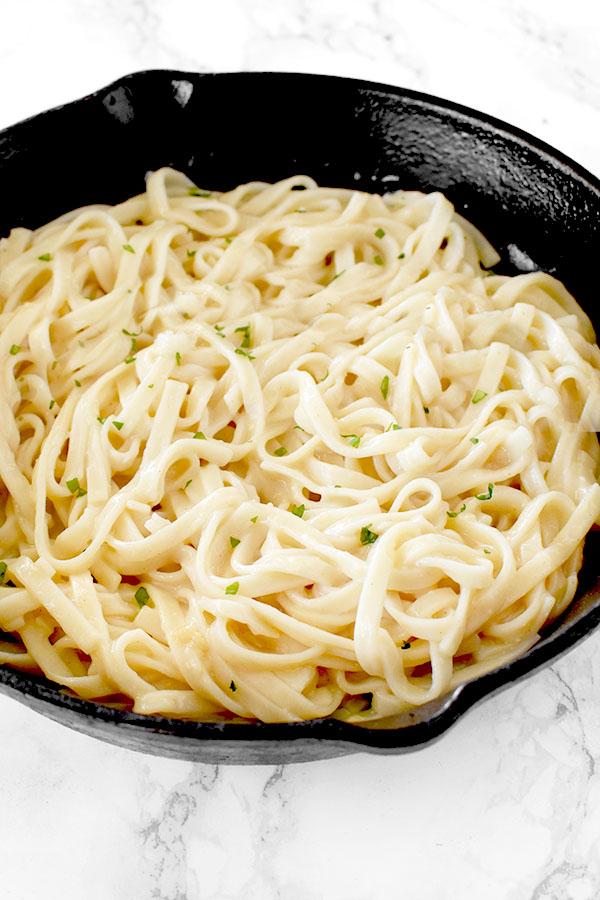 This dairy free Alfredo sauce is made without cream, without milk, without butter, and without cheese. Instead it uses coconut milk and almond cooking milk to get it’s creaminess.

Fettuccine al burro, meaning fettuccine with butter, is fresh fettuccine tossed with sauce made of just butter and Parmesan cheese.

The dish was created by Alfredo di Lelio in Rome in the 1800’s and became very popular.

By the 1900’s the dish made it’s away to America, where it became known exclusively by the name of it’s creator Alfredo.

Heavy cream and garlic were added making it heavier and richer and eventually it also became common to add other things like chicken or broccoli to the dish.

Today, fettuccine al burro is generally considered home cooking while fettuccine Alfredo can be found in pizzerias and Italian-American restaurants.

Still, the dish is easy enough to make at home.

This dairy free Alfredo sauce is made without cream and doesn’t use butter or cheese either.

However, the almond cooking milk and coconut milk make it luxuriously creamy and the optional nutritional yeast for a cheese like flavor.

You may also want to check out my dairy free pesto sauce.

I was wondering if you can provide a brand of Cooking Almond milk that I can purchase in Canada. I also wonder if the coconut milk that you have in the ingredients refers to coconut milk from a can or the beverage ones (which I think it’s diluted with water). Thanks for your assistance and I look forward to trying these recipes for my family who are either allergic or sensitive to Cow’s milk.

I hope you enjoy the recipes :)