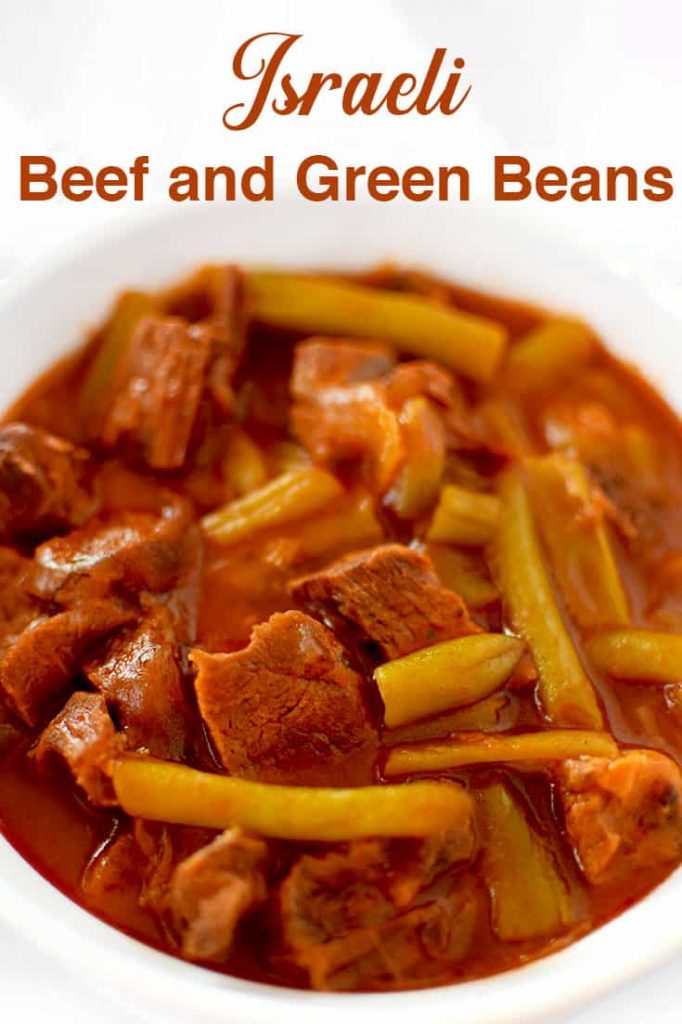 Israeli Beef and Green Beans is a tasty, easy, and classic dish. At its simplest, it is meat cooked with green beans in a seasoned tomato sauce. Serve with a side of rice for a healthy and well rounded Israeli meal!

Growing up, my mom made American food during the week and Israeli food on Shabbos.

This is in large part due to a visit from my Israeli-Syrian grandmother when I was four.

During her trip she taught my mother a number of Israeli dishes which my family eats regularly to this day.

One of them is this Israeli Beef and Green Beans recipe and another is Israeli roasted paprika potatoes.

I say she is Israeli-Syrian because her parents moved from Aleppo to Jerusalem before she was born.

My grandmother was the first generation in her family to be born in Israel.

Despite being raised in a Syrian household, her cooking was very Israeli.

In fact, I’m not sure if she knows how to make a single Syrian dish.

My family, or at least my mom, keeps this recipe insanely simple.

She only uses meat, green beans, and chicken bullion powder.

In my book, anything else is optional.

You can feel free to use frozen green beans and canned tomatoes if you want to.

If you don’t have shoulder roast, you can use any meat you have on hand.

What to serve it with

So, for an authentic meal, serve it with Israeli White Rice, Israeli Yellow Rice, or Israeli Red Rice.

Once cooled, place in an airtight container and refrigerate. Store for 3 to 4 days.

Freeze leftovers within 3-4 days.  Place in an airtight container or resealable freezer bag.

Freeze for up to 6 months.  After that, it is safe to eat. However, the quality begins to degrade.

If you are using frozen green beans, defrost first, and simmer only for five to ten minutes so it soaks in the flavors.

My Mom was Syrian and she used to make this dish with leftover roast beef only she used potatoes instead of rice adding them into the sauce with the roast beef and green beans. So Delicious

Sounds yummy! I'm going to have to try that one day :)